I don’t know about you, but one of our family’s all time favorite foods is the strawberry.

I have waxed poetic about them before. Every year we start a countdown as we watch and wait for our local farms to open their pick your own fields. Last year we added a few little plants of our own and overwintered them. I wasn’t sure how they would do, but early indications are we will have quite a few this year.

If we can keep the dogs from eating them, that is.

And the countdown is over.  Pick your own fields are opening up.  Whoo hoo!!  Time to go strawberry picking!

For Father’s Day I made one of the yummiest chocolate sheet cakes.  I can say that, because it’s not my recipe.  It is from scratch, but it doesn’t take tons of work.  It had been a long time since I had made it (I don’t know why and it won’t be a long time before I make it again).  I mean warm chocolate icing poured over warm chocolate cake so that it seeps down into the cake. [sigh].

Over the years it’s been called different names in my house.  Sister Stocket dubbed them her brownies, then Betty Crocker simply called the recipe Texas Sheet Cake Brownies.  I’m kind of partial to Ree’s description over at The Pioneer Woman. She calls it The Best Chocolate Sheet Cake. Ever.

On Monday we had it for dessert for Family Night even (hey, it’s just that good and 8 seconds in the microwave melts the icing JUUUuuuuuust enough). But I had to laugh when I went in after all was said and done and found this…

K. knows what she likes.

May 15th – the BEST holiday ever!  Today is National Chocolate Chip Day

(YES! I love these people!)

But what to make?!  Traditional Chocolate Chip Cookies?  Oh, SO good.  Especially right out of the oven.

Or Chocolate Chocolate Chip Muffins.  Oh, MY GOODNESS.  I cheat (Shhh…) .  I make them from a mix and they are SO YUMMY!

Maybe Magic Bars.  They’re SO quick and easy with the extra KICK of Butterscotch…

Oh… but you can’t forget Chocolate Chip Pie… Oh, NO.  If you haven’t had this pie.  You MUST make this pie.  It’s like having a chocolate chip cookie in a pie.  Please, eat it warm.  It’s really the only way.   I am absolutely going to make this pie today.  It will be a fitting tribute to the Chocolate Chip.

But I KNOW there are thousands of ways to enjoy chocolate chips.   What would you consider an appropriate way to honor the venerable chocolate chip? 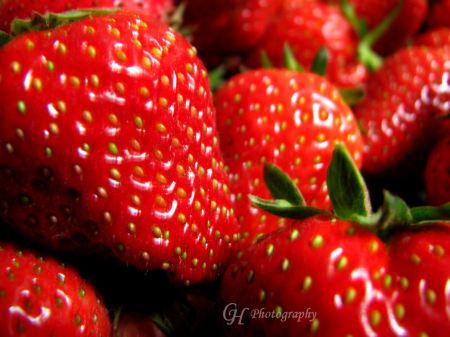 Strawberries are one the most wonderful gifts we have ever been given.  Fresh out of the box with nothing else added they taste like sunshine, spring and happiness bursting in each sweet bite.

K. and I went and picked 30+ lbs. of these delightful berries yesterday.  I’ve already made 6 pints of jam and frozen some of the berries for other things in the year.  We had shortcake for dessert last night.  And I still have some in the fridge to have fun with now (YES!).

So what are your favorite strawberry recipes?  I’d love to try some of them.

I love ice cream. I adore chocolate and raspberry together.

One recent wednesday, out on date, Kevin and I stopped in for some ice cream (for dinner no less – YES!)  Oh my goodness, they had “Chocolate Raspberry Truffle” ice cream.  This may not be earth shattering to you, but it is to me.  One little taste was all it took and I was in HEAVEN.  Ok, I added my favorite mixins, pecans and strawberries and it was absolutely perfect.  To. Die. For.

I think I need a year supply of this ice cream.

This has me absolutely baffled.  I’m not the greatest cook in the world but honestly, I can follow a recipe.   All the ingredients are in there (though Kevin is sure I have to have missed something).  It is humid and warm today, but still?  Enough to have cookies turn out as thin as crackers?

I just don’t get it.

And if you have any thoughts, I’m more than willing to listen.

I’m a bit of an adventurous eater.  I like sushi (thanks to the same friend who quilted all but a teeny speck on G’s quilt).  I have a favorite place to eat Sushi here where I live so I’m good to go on that.  Interestingly enough – there are more sushi places than you can shake a stick at here.

I also have a favorite Mexican place.  I’ve been to others and I like mine.  They know me there.  The service is friendly and quick and the food tastes great.  What more could I ask for?

However, Kevin and I recently took a trip to Charlotte, NC.  We didn’t start out the trip trying to not eat at any chains or anything like that.  But when we got to the Bed & Breakfast and he asked where I wanted to go for dinner – well, shoot, this was our anniversary trip so I wanted something not quite the usual run of the mill dinner.  I’m not an extravagant person and we really didn’t want to get dressed up, so we pulled out the restaurant guide in the room to see what they recommended that was really casual.  The internet was my friend that trip as well because I found a website called Chowhound that also had reviews and I was able to look up all the menus on each restaurant website (because Kevin isn’t an adventurous eater). We ended up eating at some really cool places with tons of character all very close to where we were staying (an extra added bonus).

So now I’m on a mission.  I want to eat at the same types of places here where I live.  I have to tell you it’s not that easy.  Like I said.  Mexican?  Check.  Sushi – I have somewhere I can go with or without Kevin because there is absolutely no way he would ever touch anything not cooked within an inch of it’s life, So, yeah, check.  But at the moment we’re missing a diner.

Yep.  A good all American diner.  I was a waitress in one when I was much, much younger.  The kind where the old guys come in at lunch and stay until dinner drinking their coffee.  Grandma was in every morning making the pies (egg custard was my favorite) with a 2 inch meringue.  And no more than 20 tables, MAX (there were only 3 waitresses working when it was busy!).  We tried one possibility recently – the atmosphere was right, but the food didn’t live up to the hype.  So we’re still looking.  We have another possibility.  I’ll let you know if it pans out.

And if you’re ever in Charlotte, NC check out The Penguin Drive-in, Dish and Fuel Pizza. Each have lots of character, great food and terrific service.

When he just gets you he adds a digital countdown to your wall calendar so you can see how many days until one of your favorite days ❤️ #HesPrettyAwesome #ItHelps😊
I Needed examples of typography on the ground for my homework this week so we walked around downtown. 😊 #typography #streetcovers #fxbgva #fahrenheit132
It was as beautiful as I always thought it would be to watch these this morning. #hotairballoonfestival #hotairballoons
The clouds were just too cool (plus I was home safe).
Loading Comments...